Periodic data updates are done to the Hub geodatabase. It is necessary to remove all users's locks prior to updating the geodatabase with the new information. If you are planning on running something that requires a connection all night long, you can contact us. We may be able to postpone our update.

There are three different ways in which the term "township" is used in geographic and cartographic discussions.

One of the most common references to the term "township" is used in describing the U.S. Public Land Survey System (PLSS). This is the common legal description used in land holdings and refers to a system that was developed in the early 1800’s for describing surveyed land. These townships are also called survey townships or congressional townships (because they were defined by U.S. congressional mandate). This is the system of having a township, 6 miles by 6 miles in size, subdivided into 1 mile by 1 mile sections. 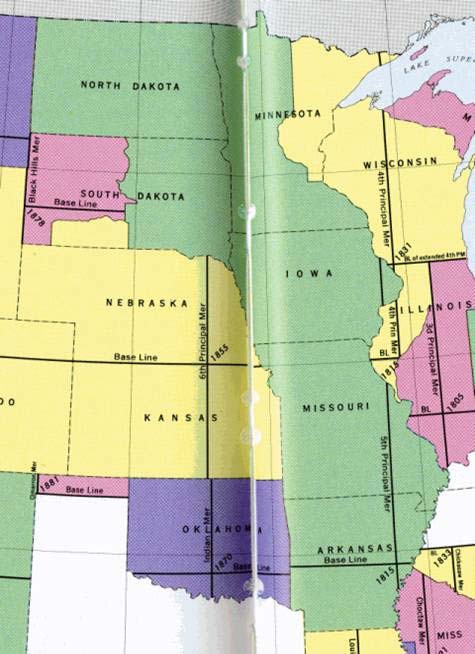 The last use for the term "township" is with civil townships. Civil townships are minor civil divisions with established governments. They can have town boards, town assessors, town clerks, their own maintained roads, etc. They are essentially a governmental sub-division of a county. Many times these townships correspond with PLSS townships. Many times they don’t. There are civil townships in Golden Valley County, North Dakota that cover 4 PLSS townships (i.e., 144 sections). There is one civil township in Ransom County that covers one complete PLSS township, and half (18 sections) of the PLSS township to the south. Most, if not all, of these townships have established names such as the Town of Almond, or the Town of Rose, or the Town of Rome. There are also many areas that are unorganized, meaning that no civil township government structure is in place. There may have been one there at one time, but maybe the residents chose to disband their local government, or maybe the population could no longer support it. Or maybe one was never formed. In either of these cases, the county usually takes over the local governmental issues.

As an example, the PLSS surveys of the Sisseton tribal/reservation lands were conducted about the 1869/1870 timeframe, while the surrounding surveys weren't finished until the mid-1880's. A rational explanation is that some mistakes were made due to the surveys being placed in the middle of "no where", 300 miles from the prime meridian and almost 800 miles from the baseline. Normally the PLSS surveys were started in the southeast corner of the township and they would survey each mile north and west until a township was finished. Errors across the township would be corrected when the township was finished by creating government lots on the north and west sides of the township. The townships would be built south to north like a brick building with corrections taking place about every four townships to account for the length of a degree of longitude shortening as you move north (One degree of Longitude at the Equator is about 70 miles while here in ND it is only about 45 miles). So when you consider the time periods and conditions they were working in, and the relatively imprecise methods they were using (compared to now), it's amazing that they came as close as they did. It'd be something like building a skyscraper and putting a window in on the 50th floor and hoping that the wall you built from the ground to the window later would fit exactly. The older surveys hold legal precedence over newer surveys, so nothing would change on the tribal lands even after they discovered the differences.

Although not very many nationwide, some hydrologic units (HU) carry their number as their name. That is the case for over 300 of the 2,656 hydrologic units in North Dakota. The number is used in places where there is no significant hydrological features or where the hydrologic features are used for larger, parent features, such as near Lake Sakakawea or the Missouri River. We have elected to give many units its number for its name since there is no other water feature that can be used. As the WBD is a certified dataset, this choice was reviewed not only at the state level but the national level as well.

We strive to use GNIS (Geographic Names Information System) names whenever possible, if there is a GNIS feature that falls within the boundaries of a hydrologic unit. In some cases, we could have used a named cemetery or school as a name, but the preferred standard is to use a named hydrographic or geomorphic feature on the landscape (coulee, river, stream, bluff, hill, etc.). If there is no other hydrologic name that would be appropriate for a particular HUC_12 unit, the number is used. It is a common occurrence in North Dakota where there are large areas of un-integrated drainage, unpopulated places, unnamed intermittent creeks, or a large area of a reservoir that spans at least 27 12-digit hydrologic units.

One of the federally mandated outcomes of the Source Water Protection Program is the delineation of Wellhead Protection Areas (WHPAs) and Source Water Protection Areas (SWPAs); these are areas around a well or surface water intake from which a public water system draws its water. The ND_WHPA_Community and ND_WHPA_NonCommunity layers depict those WHPAs and SWPAs that have been completed by the North Dakota Department of Environmental Quality. The data is dynamic and the GIS layer on the ND GIS hub is updated weekly.

What is the North Dakota Source Water Protection Program?

The remaining four elements (development of management strategies, development of contingency plans, public awareness and procedures when installing new wells) are strictly voluntarily and can be pursued by the governing body of the public water system.

How do I get more information regarding the North Dakota Source Water Protection Program?